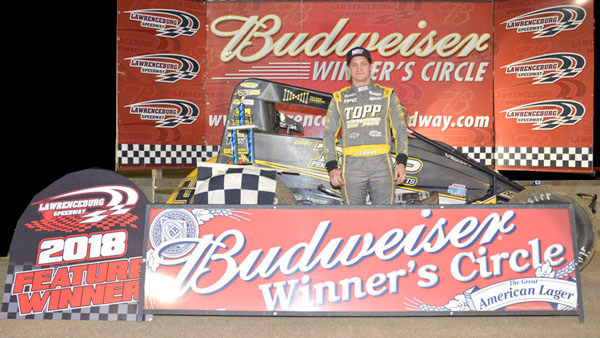 Justin Grant in the winner's circle at Lawrenceburg Speedway on Saturday, April 21. Photo by Tim Thomas.

Avon, Indiana’s Justin Grant won the opening night at Lawrenceburg Speedway in the first race for the Kelsey Chevrolet Sprint Cars. He would take the green flag from the 4th starting spot and wrestled the lead away from CJ Leary within a couple laps. Leary settled back into second and Chris Windom third. The leaders began to catch the back half of the field which allowed Windom to get around Leary for second. As the field began to get strung out, Windom would close in lapped traffic but never was able to challenge Justin Grant for the win. Grant picked up his 10th career win at Lawrenceburg tying him with Leary for second on the all time Sprint Car wins list on the 3/8 mile configuration. Windom finished second followed by Leary, Landon Simon, and Dickie Gaines. Garrett Abrams was the Hard Charger gaining 11 positions from his starting spot. Heat race winners were Windom, Cottle and Landon Simon. The Kelsey Chevrolet Sprint Cars return to the track on Saturday April 28th. 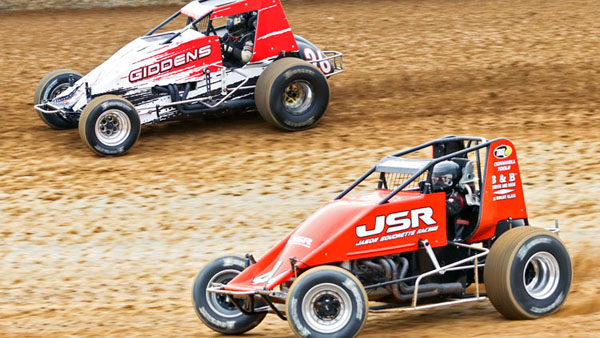 Aurora, Indiana’s Matt Hamilton started 10th in the 20 lap Budweiser UMP Modifieds feature. It wouldn’t take him long to move to the top 3, and challenge for the lead. As the green flag flew, defending track champ David Spille saw Joey Kramer, Brad Wieck and Adam Stricker move around him on the start moving Spille back. Kramer, Wieck and Stricker battled for the top spot for a few laps before Kramer settled in as the race leader. Meanwhile, Hamilton was picking off cars left and right and had made his way to second when the caution came out with 7 laps to go. On the restart Kramer and Hamilton pulled way and settled it between themselves. It didn’t look like Hamilton was going to have enough but coming to 2 laps to go, Hamilton drove underneath Kramer in turn 3 and was just able to slide up in front of him, causing both drivers to check up. Kramer tried to go back underneath Hamilton but lost his momentum and was not able get a run on Hamilton. Hamilton won for the 18th time at Lawrenceburg. Kramer finished second followed by Stricker, Kyle Schornick, and Brad Wieck. Heat race winners were Stricker, Wieck and Cory Skipton. The Budweiser UMP Modifieds return to Lawrenceburg on Saturday April 28th.

16 year old Bradley Eberhart looked like he was going to win the Bessler’s U Pull N Save Hornet Feature at Lawrenceburg Speedway but then the caution came out. And it came out at the wrong time. He had just passed Madison Kearns for second place when defending track champ Cordell Moore, broke while leading bring out the yellow. This caused scoring to revert back 1 lap which but Eberhart back behind Kearns for the restart with 2 laps to go. On the restart and the white flag lap, Eberhart made contact with Kearns in turn 1, causing her to get sideways a bit. Eberhart did not continue to push her as she more than likely would have spun out had he done so. However, the contact was enough to allow Eberhart to pass her and beat her back to the checkered flag for the win. Eberhart was quick to apologize for the contact in victory lane, and admitted it was not the way he wanted to win. Kearns finished second followed by Tyler McGhee, Gary Hume, and John Hampton. Heat race winners were Hume, McGhee, Cordell Moore, and Kearns. Gary Whitt won the B Main. The Besslers u Pull N Save Hornets return to the Speedway on Saturday April 28th. 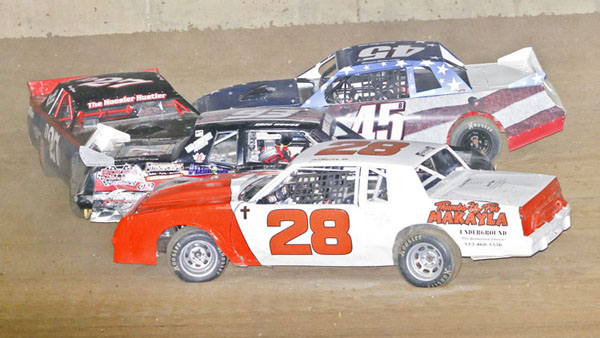 Richmond, Indiana’s Dalton Smith had raced Hornets for the last few years. He always was a threat to win, and often times did win. He moved up to the Impact Sports Purestock class for 2018 and it with that comes a learning curve.   Going from a front wheel drive car to a rear wheel drive car with a lot more power doesn’t appear to be easy. For that being said, it didn’t appear Dalton Smith had a whole lot of trouble adapting to the differences. In only his second night out in the car, he dominated the crash filled Purestock feature to pick up his first win in a Purestock. Defending track champ, Don Grace finished second followed by Mike Ackman, Kevin Tuggle, and Greg Mathews. Heat race winners were Eric House and Dalton Smith. The Impact Sports Purestocks return to Lawrenceburg on Saturday April 28th. 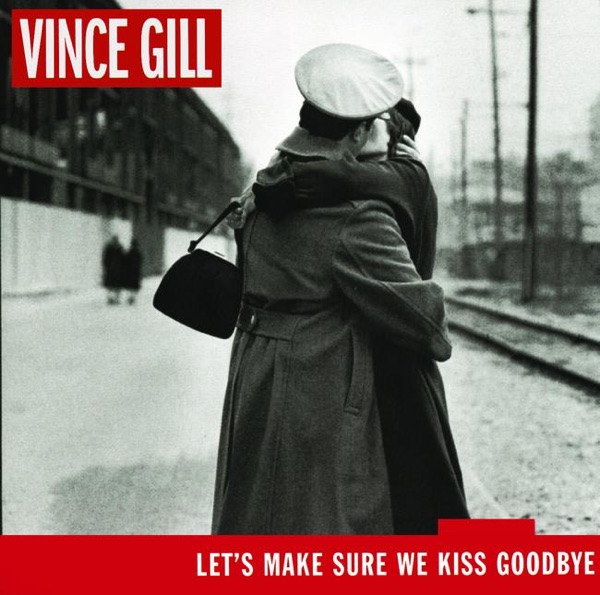