The 14th annual induction ceremony was held this past Saturday in Columbus, Ohio. 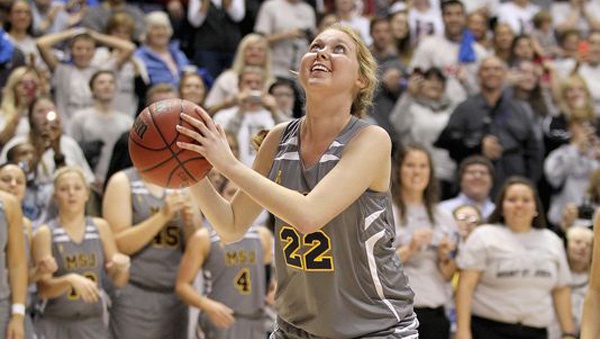 (Columbus, Oh.) – Lauren Hill lost her life far too soon, but her name will live forever.

On Saturday, Hill was posthumously inducted into the Ohio Basketball Hall of Fame for her achievements in basketball and for serving as an inspiration to many people.

Hill’s story gained national media attention in 2014 when she was a freshman at Mount St. Joseph University.

It was there that she made a courageous appearance in a sold-out, nationally televised game at Xavier University’s Cintas Center, despite battling a rare and fatal pediatric brain tumor known as DIPG.

Not only did she appear in the game, but Hill scored the first and last baskets in front of 10,250 fans.

More importantly, Hill started a fund-raising campaign that has raised approximately $2.4 million for cancer research and to help families effected by pediatric cancer.

Additional funds for Lauren’s Fight for Cure will be raised on Saturday, June 15 at the annual Lauren’s Burg Hill 5K run/walk and 5-mile run in Lawrenceburg.

Robb Reel playing
Carly Pearce - What He Didn't Do