Dearwester won a state championship as a freshman and is nationally ranked in her weight class. 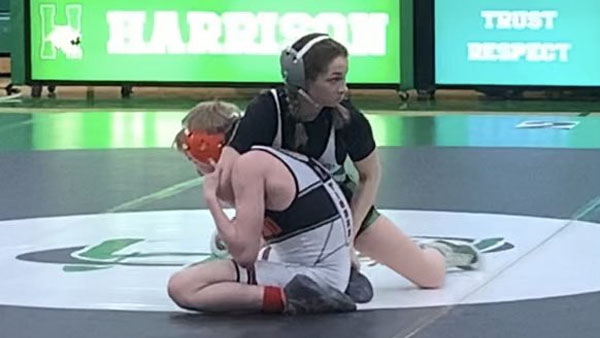 (Harrison, Oh.) – A record-setting and trailblazing wrestler from Harrison High School has earned recognition for a terrific season on the mat.

Dearwester is certainly deserving of the honor as she went 32-1 as a freshman, winning the OHSWCA Girls State Championship at 106 pounds.

In doing so, she became the first girls wrestling state champion in Harrison High School and Cincinnati history. At the state finals, Dearwester went 4-0, winning each match by pinfall. Her total time on the mat was 3:15.

Dearwester beat out Olivia Messerly (Ryle) and Lizbeth Banderas-Rodriguez (Norwood) to win the Wrestler of the Year Award.

The announcement was made by Kyle Snyder, the youngest wrestler ever to win the World, NCAA, and Olympic championships in the same year.

Dearwester, the daughter of former All-American Rob Dearwester, could be on a path to greater things in the future. According to USA Wrestling, she ranks sixth nationally in the 106-pound weight class.

She the award announcement in the video player below around the 50:00 mark.