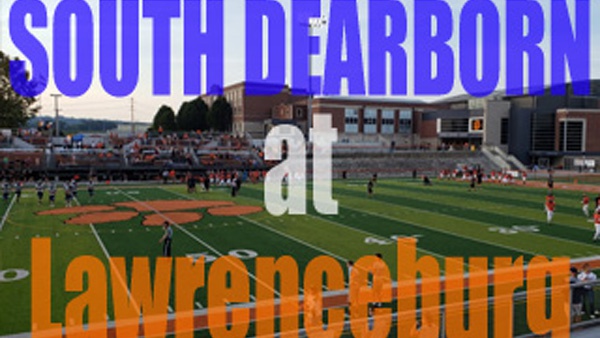 (Lawrenceburg, Ind.) – It will be a “big game” atmosphere in Lawrenceburg Friday night.

As the Indiana high school football comes to an end tonight, Lawrenceburg and South Dearborn will renew their rivalry in “The Pit.” Kickoff is scheduled for 7:00 p.m.

Lawrenceburg enters the game at 7-1 and the champions of the EIAC 3A Division. The Knights march into Lawrenceburg with a 5-3 record but hold the bragging rights over the Tigers after last year’s dramatic 20-14 overtime win in Aurora.

Still, Lawrenceburg has won 7 of the last 10 meetings.

*An invitation was also extended to Coach Ballart

“Coach Ballert and his staff have done a great job of changing that culture,” said Knigga. “They got some great players, that do some things very well for them, but It is a rivalry and its always been a rivalry. Going back to last year was a great game. They have a good team, good staff and are playing really well right now.”

Who will take home bragging rights this year?

Find out tonight on Eagle Country 99.3. We have full coverage of Knights and Tigers starting at 6:40 p.m. Travis Thayer and John Blackwell will be on the call.