This shipment of cocaine has a street value of approximately $45,000. 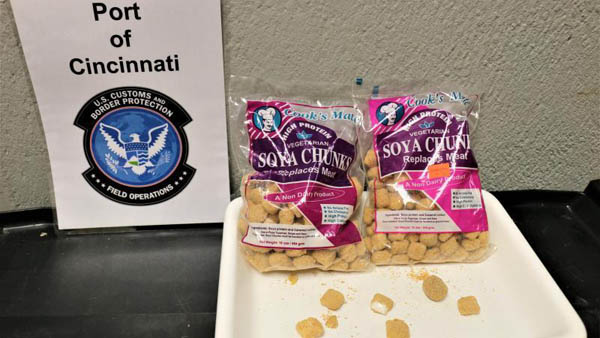 On Monday, June 1, officers found something strange about a shipment from Trinidad and Tobago that was coming through a local express consignment facility.

The package was marked as "food stuff" and contained bars of soaps and multiple different food products, including two bags of "Soya Chunks."

After opening one of the nuggets in a Soya Chunk bag, CBP officers found "small pellets of a white, powdery substance." Through testing, it was confirmed that the powder was cocaine. This shipment of cocaine has a street value of approximately $45,000.

“Smugglers can be creative in their attempts to get narcotics past our frontline,” said Cincinnati Port Director Richard Gillespie. “Our officers are exceptional at identifying shipments that warrant additional scrutiny, and now, more than ever, their skills are critical in securing our nation’s borders.”