The 15th annual Dick Gaines Memorial sprint car race was held at The 'Burg on August 18. 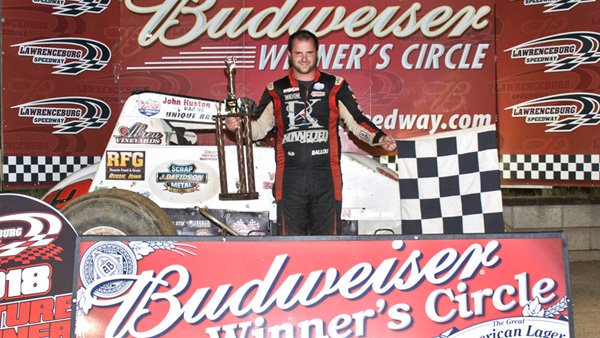 (Lawrenceburg, Ind.) - Rocklin, California’s Robert Ballou made a last corner pass on the outside of Jarrett Andretti to win the 15th running of the Dick Gaines Memorial. It was Ballou’s second Gaines Memorial, and he became the first repeat winner and back to back winner. Nick Bilbee took the green flag from the pole position and stretched the lead out to several car lengths over the rest of the field. The leaders began to catch the back half of the field, and that slowed Bilbee’s run and allowed Jarrett Andretti to catch the leader. It appeared that something seemed to happen to Bilbee’s car about halfway through the race, as he seemed to struggle with speed through the turns. Andretti snuck around BIlbee on the 14th lap and looked to be on his way to the feature win. Meanwhile, Dickie Gaines, the son of the late Dick Gaines of which this race was named was in hot pursuit of Bilbee for second. Gaines has never finished better than second in this race. Gaines, and Bilbee traded second place multiple times each one almost crashing several times but each continued on. The race was slowed by caution with 3 laps to go setting up a thrilling finish. Robert Ballou had made his way to second for the final restart, and was applying pressure to Andretti. Coming to the white flag, Andretti led Ballou by a car length. In turn 3, Andretti went low, and Ballou went high. Ballou with the momentum on the outside beat Andretti back to the line by a half a car length. The rest of the top 5 was Garrett Abrams, Nick Bilbee, and Dickie Gaines. Heat race winners were Gaines, Bilbee, and Ballou. The Kelsey Chevrolet Sprint Cars return to the track on Saturday September 1st.

Stricker picks up third modified win of year at Lawrenceburg

Batavia, Ohio’s Adam Stricker won for the third time at Lawrenceburg this year!Joey Kramer grabbed the lead on the opening lap and really looked like the car to beat leading the first 7 laps. The caution flag came out on lap 8 and under caution Kramer lost power and retired from the event as the leader. Kyle Schornick restarted as the leader, but Stricker passed him on the restart and went on to lead the final 13 laps. Schornick mounted a last lap challenge but was not close enough to make the pass. The rest of the top 5 was Scotty Kincaid (who started last), Jim Szekacs, and Pete Holt. Heat race winners were Stricker, Brad Wieck, and Joey Kramer. The Budweiser UMP Modifeids return to the track on Saturday August 25th.

Gary Hume appeared to be on his way to his first career Hornet win. Unfortunately, a caution flag came out and while Hume was racing with Cordell Moore, the tow made contact sending Hume into the mud in turn 2 sending him to the back on the restart. That put Bradley Eberhart as the race leader with just 2 laps remaining. Eberhart held off a hard charging Cordell Moore for his second win of the year. The rest of the top 5 was Michelle Baird, John Hampton, and Jack Plfum. Heat Race winners were Hume, Cordell Moore, and Eberhart. The Bessler’s U Pull N Save Hornets return to the track on Saturday August 25th for the first running of the Hornet Nationals.

Don Grace used a slower car as a pick to pass race leader Mike Ackman with 2 laps to go to pick up the Impact Sport Pure Stock Feature Win. Ackman, who is having a great season in limited starts had the race under control but a lapped car forced him to take a different line, and allowed Grace to get a run on the outside and take the lead. Ackman held on to second, followed by Danny Eichler, Adam Jones, and Will Hayes. Mike Ackman won the heat race. The Impact Sports Pure Stocks return to the track on Saturday September 1st.