He’s come a long way since racing dragsters as a boy at Edgewater Park in Cleves.

“This is what you live your whole life for when you start racing Junior Dragsters at 10 years old. You hope that you can get to this point in your life and your career, but you never really think it is going to happen,” Todd said.

The 36-year-old is the first African-American Funny Car champ in NHRA history. 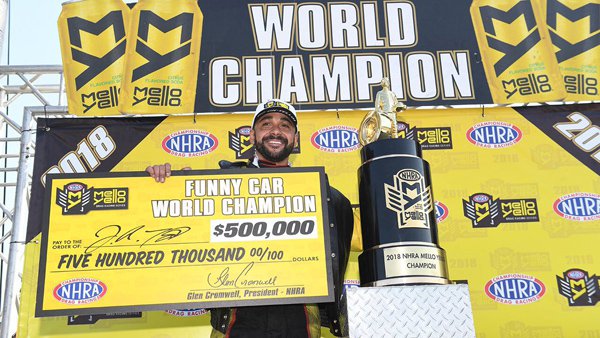 Todd had a 74-point lead over defending Funny Car champion Robert Hight heading into the final event of the season, the NHRA Finals at Auto Club Raceway in Pomona, California. The championship was clinched when Hight smoked his tires and lost in the opening round.

But Todd decided to take the title in style. He went on to win the NHRA Finals in the Kalitta Motorsports DHL/ WIX Filters Toyota Camry.

“People kept asking, ‘what do you need to do to clinch?’,” Todd stated. “I’m like, we need to win the race. We need to not worry about what we need to clinch it. Seeing Robert smoke the tires first round was instant relief. My crew was racing smart and the Yella Fellas do an awesome job preparing the thing today. They stayed focused all day long because there were a lot of distractions around our pit area and they did their job.”

Todd still has plenty of family in the Lawrenceburg area, including his father Mario Todd and grandmother Patty Moser.

“I was so excited. I woke up this morning and I thought ‘Did that really happen?’” said Moser, who watched the NHRA broadcast on Fox Sports from a restaurant in Rising Sun.

Eagle Country 99.3's Bubba Bo spoke with a proud Grandma Moser on Monday morning. Hear the conversation in the audio player below.

So happy for my friend @JRTodd373 on winning the NHRA Funny Car Championship!

Congrats @JRTodd373 on your @NHRA Championship. 👊

Small tracks like Lawrenceburg Speedway are where racing families are born. For @JRTodd373, it was where he watched his dad ride motorcycles & dreamed of following in his footsteps. See the full story here: https://t.co/peaX30xPH3

Travis Thayer playing
Carrie Underwood - I Told You So