A Hamilton, Ohio resident was first and a Greendale resident placed second at the FLW Bass Fishing League tournament on the Ohio River. 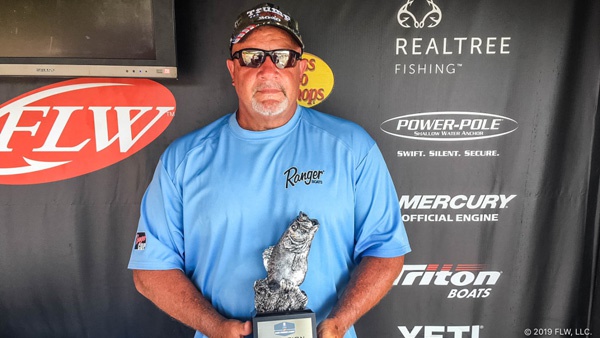 Mike Mills, of Hamilton, Ohio, with his trophy for winning the FLW Bass Fishing League event in Lawrenceburg on Saturday, August 17. FLW photo.

The BFL, a 24-division circuit devoted to weekend anglers, has made Lawrenceburg an annual stop.

After starting his day casting in Tanners Creek with limited results over three hours, he went far up the Ohio River and fished three creeks near Meldahl Dam.

“I’ve fished those creeks over the years – just shallow, flat creeks. I knew they were in there, I found them in practice,” said Mills, who earned his second career victory in BFL competition. “I caught them here and there – I think I had my limit by 1:00 [p.m.]. I culled a couple fish and caught my last at about 2:00 [p.m.].”

The single-largest fish of the tournament was reeled in by Michael McCoy, of Menton-on-the-Lake, Ohio. The bass was 4 pounds, 11 ounces to earn him a Big Bass award of $435.

Full results from the FLW BFL stop in Lawrenceburg can be found online at www.flwfishing.com/results/2019-08-17-ohio-river-tanners-creek.